The Harris Hawk is back

Flabby, insignificant irritating little fronts have followed me here, probably from Jersey of course, which is no surprise to me. They delight in stealing sunshine and views and precipitating feebly, not enough to saturate but just enough to drown recent memories of sunshine and summer and to reduce me to drawing up new lists of indoor jobs. It didn’t take long to check out the bilges up for’ard (dry), count the emergency water bottles (1 less than I thought), blitz the fore cabin (sort of), find a forgotten thingy or 2 (useful), fit a tie for the bow thruster and anchor winch switches (nugatory but useful) – impressive for sure, but if I don’t slow down, go with the flow, and chill I will quickly run out of indoor jobs for Pippin is not a very large lady. So I left the amidships jobs for another day, another front.

My daily exercise is a 2 mile round trip to Aldi, and by the time I got back, it had stopped raining and my outdoor list said I had to scrub the waterline …… a quick job as the Mullet had got there first. 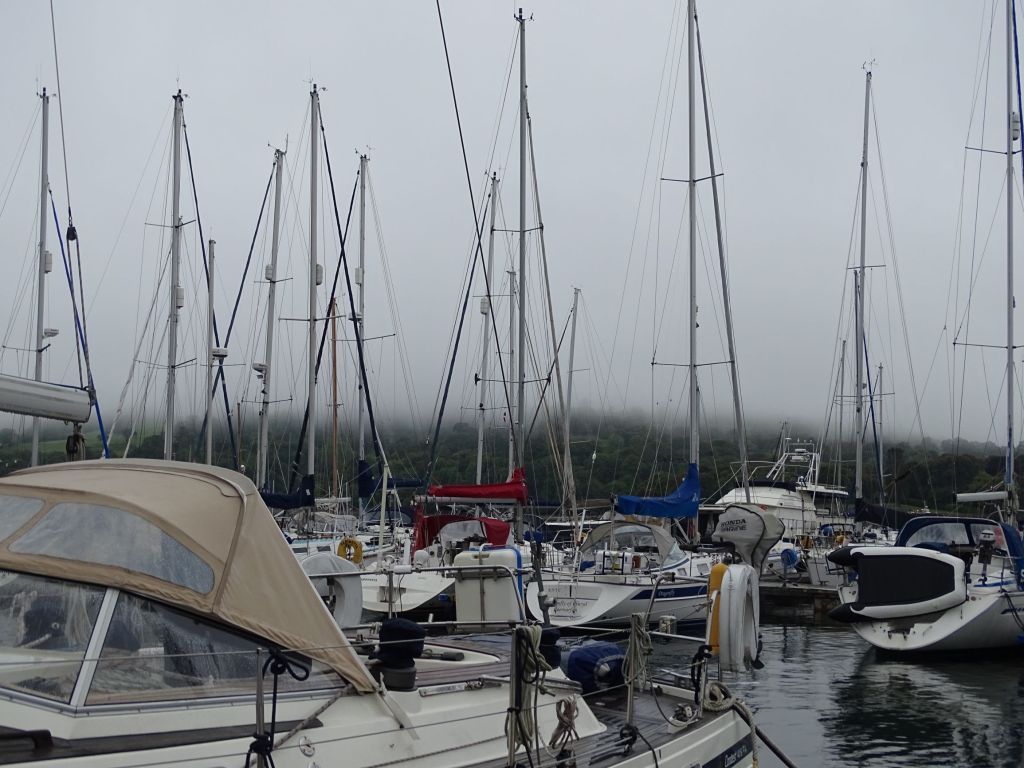 Star of the show

My indoor list next morning directed me to the main cabin to count tins and packages of rations; it proved a very useful exercise as it reminded me of what I have and why Pippin’s waterline, raised 2″ during her refit, lies once more just above the surface. This took quite some time so I turned to the outdoor list for a change and took the dinghy to refuel my jerrycans. At this point I will welcome another member of my team, the electric outboard which I have named Cpl. Volt and my mission, according to my list, is to drive it until it runs flat.

Whilst trying very hard to do that, I came across an ocean scarred little boat I know well from YouTube and the Jester website called Bolean, a tiny Westerly 22 (that’s right 22′!!) – note that the Jester Challenge is actually for boats up to 30′, though a few are larger. Its skipper is the colourful, irrepressible Jester veteran Bill Churchouse and Bolean is his home. Think about that – could you live in a space perhaps 11′ (narrowing at one end) by 6′ wide and maybe a little over 5′ high, with everything you need and own; I couldn’t. I asked Bill if he minded my taking a photograph (of his boat) to which he replied; “clothes on or naked?” and I felt quite sure he would have stripped off if asked.

He is joining 18 other Jesters to take part in the the Jester Baltimore Challenge replacement event, known as 51/8 that runs out into the Celtic Sea to N51 W8 and back to Milford Haven and one of them intends also to do the Azores run, which in my books makes him a bottle short of a 6 pack, though a fine seaman for sure. 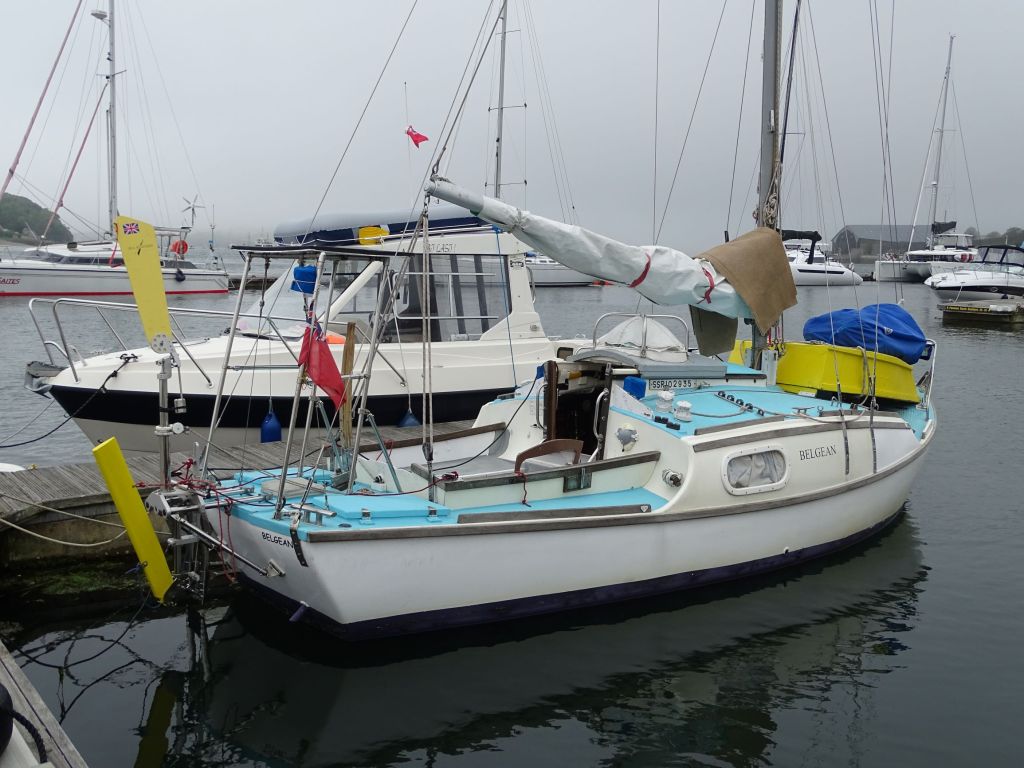 I parked Cpl Volt near Bolean and invited Bill for a cuppa and he arrived just as John Moody joined us, another 51/8 Challenger, for it is emphatically not a race. As Bill said, everyone is accorded the same respect and welcome, no matter when they finish.

Anyway, I watched embarrassed as Bill’s eyes took in the palatial saloon of Pippin, for you couldn’t swing a ration pack in his boat, and began to guiltily blurt out that Pippin was a small 34′; a very, very small 34′ and actually she was only 28′ 6″ on the waterline…. This of course cut no ice with Bill who continued to rib me gently whilst acknowledging his respect for every Jester. Unfortunately he didn’t help when he looked thoughtfully at the Azores entry list and predicted that probably not all 11 would turn up and just 3 would get to the Azores – including me. Well if that isn’t a challenge I don’t know what is, but as this modest, great sailor said, everyone who arrives at the start line is a winner and good seamanship is about knowing when you have had enough. I shall remember those words.

John is a Jester virgin, though already a winner and I suspect he will do just fine – he certainly has a good boat (Mirage 29, built in the 80s by Thames Marine). Anyway, just then he probably wasn’t helped either by Bill, who likes to tell a story. He began to recount a harrowing Jester tale of an inexperienced sailor in his small ill prepared boat. His unsuitability for the event was clear to all and so he was not allowed to take part in that Azores Challenge, though as a consolation he was permitted to sail across the Plymouth start line. He then somehow got across the Channel and coast hopped through French, Galician and Portuguese ports, before crossing to the Azores long after the other Challengers had left. October came and, ignoring all advice not to set sail, he set out for Portugal.

His life raft was discovered days later, half full of water inside which was his half dressed dead body; no sign of his boat was ever found. Then there was the Pole who fell overboard – they found his boat, Bill could have gone on, I’m sure. When John left I suggested to Bill that such stories were not what he really wanted to hear, whereupon he wandered over to chat and encourage John.

After such tales, I urgently needed a distraction, so marched to Aldi, with no idea what I wanted, returning with custard – which I find you can never have too much of. – and I can categorically state, after protracted investigation, that Aldi don’t stock Gentleman’s Relish, or Black Pudding.

Next day sunshine arrived but it didn’t make the outskirts of Plymouth any more appealing than before. Funnily enough I didn’t need my tyres changed, or a tattoo, haircut, reject furniture, KFC or bang bang chicken. A Chinese restaurant appealed at least in my head but not when I saw it 1.5 miles out – certainly not worth the walk, certainly not when I discovered 40% of its online ratings were one star. So I suffered instead with a fresh doughnut and heart stopping coffee aboard whilst I reviewed the list. Luckily it had one or 2 outside jobs, one of which was to begin removing and bagging up my sails ready for the new ones to be fitted on the weekend.

Meanwhile Jester boats competing in the 51/8 continued to trickle in during the day, though numbers seemed down.

Today was Jester 51/8 departure day though regardless of such important things, my list informed me that I had clothes washing to do, not a Willis favourite job; unfortunately God had given me a perfect drying day, so there was no excuse though I prevaricated as long as was decent.

Afterwards I met George, skipper of the lovely wooden yawl Good Report, who is the starter for today’s 51/8 Challenge. He is also in the line up for the Azores and informed me that we are now down to 8 in number. In May there were 30 more and I assume one of the reasons is that neither France nor Spain offer boltholes whilst Covid restrictions remain.

There was no fuss about departure, everyone just quietly got on with their own preparations and left without fanfare for Plymouth breakwater about 2 miles off. John looked quietly determined and Bill was his normal irrepressible self, though he was obviously highly focused. Probably the youngest entrant, Chris Ling in Pocket Battleship, a very speedy Django 770, seemed well prepared for some high speed sailing.

And then they were gone. Even though the weather looks set fair, certainly better than in 2019 possibly because I’m not in it, anything can happen at sea and I wished them all the very best of luck. 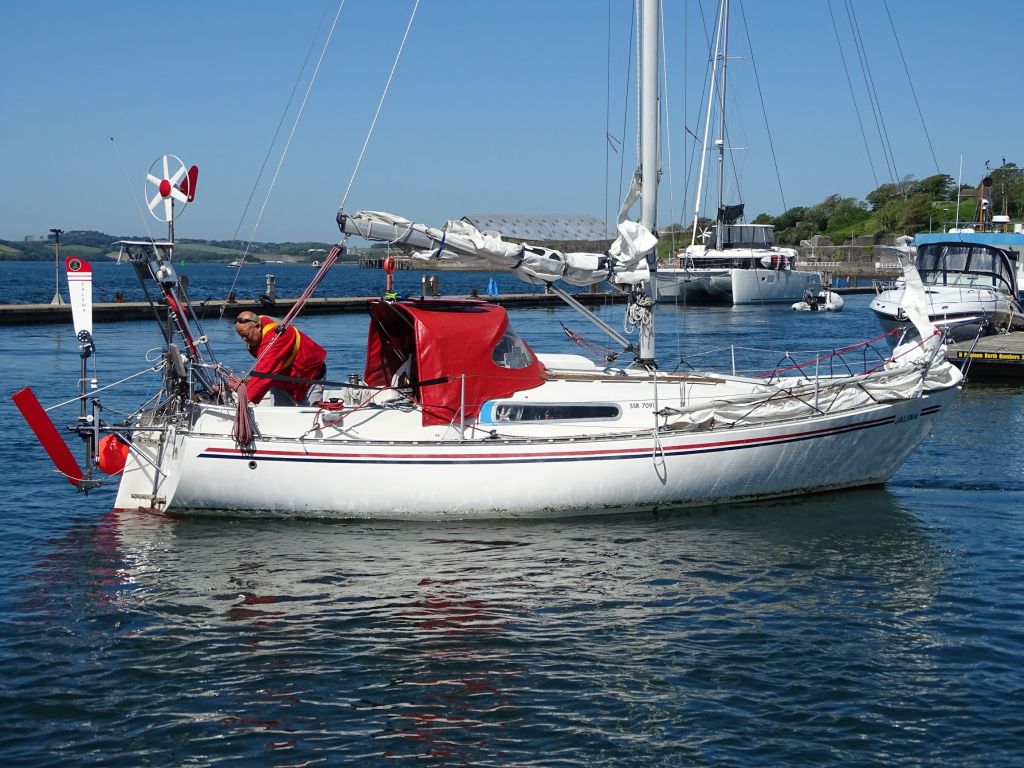 Afterwards Graeme, a fellow Azores Challenger, stepped aboard for coffee and it was good to chat. He is skipper of an Albin Vega 27′ a type which though petite, has both circumnavigated and sailed to the Arctic and Graeme seemed no mean sailor himself. He left to take his boat back up the River Tamar (just round the corner from here) and to sort out work affairs before our Challenge.

Time for my exercise and at least in this part of Plymouth you meet interesting people. As I puffed up across Stonehouse Bridge with Aldi in my sights, I was closing on a lady of younger middle years when she stopped, placed her large shipping back down, pulled out a pair of knickers and put them on.

2 comments on “In between times – Jesters arrive, and leave”