I want a cabbage – nothing fancy, just one of those ordinary smooth ones (NOT the crinkly type), but every time I check out the vegetable counter there are none.  I fancy cabbage and chorizo with fried potato and know that, having got a cabbage, I’ll probably have to fly to Spain for the Chorizo but I’ll cross that bridge when I get there.  David said he saw 5, but I checked out his story; he had only been 20 minutes behind me into the supermarket and unless there had been a delivery just then (unlikely), he didn’t know his smooth cabbage from his cauliflower (most likely scenario).  But I am a determined sort and as the back really is  still grumbling, I may have plenty of time to find one.

Kevin the taxi, who transported Angie and I back in 2017 and is still around, is a bit of a foodie so he might be one to call; it would certainly be a great scene, taxi pulling up outside the oldest most distinguished yacht club in the World to deliver my cabbage.  Kevin the taxi used to struggle with his steering wheel as his stomach got in the way, but now he has taken up ball room dancing and has trimmed down considerably.

Pausing one morning to view the overcast in hope of seeing a little blue, I noticed a ripple in  the water, a ripple soon pierced by 2 elegant smooth grey backs and then 2 achingly pretty little curious whiskered heads.  They were otters, which I had only seen once before in the far north of Scotland. 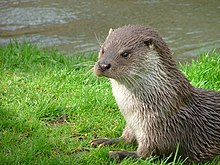 The River Owenabue runs through Crosshaven and empties into Cork Harbour.  It is known to be home to Heron and otters, which are members of the weasel family and the Irish for otter is “madra uisce“, which delightfully means water dog.  Famously elusive and reputed to have assisted St. Brendan in his journey, the highest concentration of otters in Europe is here in Ireland.  They are not just cute, but fast too, being capable of swimming and running faster than most humans.

Dick turned up yesterday, as promised, with Barry to remove Pippin’s main sail for surgery.  I winced as I watched Barry lug the big sail onto his shoulder and stride off, promising it would be back in a day or two.  Meanwhile I lugged a couple of jerrycans around and topped up the diesel tank, which didn’t help the back but made me feel more prepared for departure whenever.

Angie and I liked Crosshaven in 2017 and I still like it now.  It has echoes of Penzance, for it is a quirky laid back sort of place.  For example, a security wall surrounds most of the RCYC and there is a closed security gate at one end, the one you go through to the village.  Going out is fine, getting in impossible for the keypad only goes up to the number 5.  The code for entry to all gates here has a 7 and a 9 in it!  Never mind, head round the other side and you can get in without trouble for it is permanently wide open.

Just as Irish is the Tourist Information Office, a half size rickety porta-cabin that wasn’t open in 2017 and isn’t now, unless they do night shifts.  It is so ridiculously sited that the first any passing motorist will see of it is a view in the rear mirror and the only people nearby are those in the RCYC.  I can only assume it fell of the lorry taking it into the village and was never picked up.

Anne behind the bar curled her lip disdainfully when I said I would like a Guinness.  “that’s from Dublin” she sneered “you’ll be wanting Beamish or Murphys“.   Not wishing to upset local sensibility, I settled before the Murphys before stuffing myself to bursting with a Chinese sweet and sour pork – with egg fried rice.  I don’t know what it is about sailing, but when I’ve been at sea a while I crave a Chinese ashore.

I have never been one for bothering much about my wardrobe, but hand washing and hanging it all around the boat very publicly rather focuses the mind – frankly I am not bothered, but looking at it fluttering like litter in a breeze, I concede that much of my attire is over due replacement.  My children would certainly be embarrassed  by my tired display of socks, underpants vests and work shirts so by way of concession,  I’ll catch the 220 bus into Cork for a little essential retail activity if I have to stay much longer.  Mind you, I might just allow myself to be diverted by the English Market in Cork, which boasts a wonderful café and restaurant.

One of the many good things about being solo is the people you meet – other solo sailors find each other and if one needs assistance, it materialises somehow as I have again discovered.  Yesterday Dick and Barry dropped everything to remove my mainsail and take it away for repair and today it is back on.  No big deal, except this is race week where every sailmaker within a zillion miles is flat out tending to the demands of racing teams.  Dick, who used to own UK Sails here, came out of retirement and into the sail loft, personally stitched up Pippin’s main sail working as long as it took and brought it back, complete with a beefy Irish rugby player to refit it and the reefing lines.  All I had to do was get in the way and make tea.  Turns out Dick is a classic car buff since giving up sailing and ok he hasn’t got a Citroen Traction Avant (JMW’s somewhat idiosyncratic vintage car of choice), but he does have a lovely 1978 BMW635 Coupe.  So we cooed over car pictures and slurped tea as my underpants flapped in the breeze inches from is nose and Dick proclaimed Pippin to be a grand wee ship – which of course she is.