I never set sail on longer voyages without a visit to my Polish mate up Mill Street in St. Peter Port.  He is a barber and we play the numbers game.  Something like; “What will it be today?”  “Oh I don’t know.  A little shorter than usual; choose a number, any except ONE”.  At this point his eyes take on a malicious gleam and he refuses to meet my gaze and 15 minutes later I am like a slightly hairy gooseberry.  Still, he is too nice to mention I did not need much off top rear, as it’s thin enough to allow burning of my pate.

The other ritual is loading stores Willis style, the main theme of which centres on the word haphazard.  As it takes place over a number of weeks, I do tend to forget what’s already been stowed away, which is probably why I have 15 tins of sardines and no toilet rolls.  Pippin’s water line gradually submerged during this process, which of course is not ideal if you are the racing type, which fortunately I am not though I will soon be in a race.  Its not a conventional race, more a gathering of fellow solo eccentrics with a start line and destination.  Anyway, I don’t like spilling my tea so hopefully weather and hazards will allow me a gentlemanly result, somewhere near the back of the field but not so far back as to do irreparable damage to my pride.

By way of limbering up for the voyage, Pippin and I pottered out of St. peter Port to practice this and that over a number of weeks, which only served to highlight my deficiencies including arthritic fingers, whilst also highlighting the prodigious talents of my fine little ship.  Preparations complete, it was time to go and these days I am much keener on weather windows in preference to setting forth regardless in heroic manner as in days of old.  Call it old age, or perhaps I’ve finally discovered common sense.

Leaving of course means saying farewell, but I am lucky that I am able to go and do what I do with the blessing of long suffering wife Angie.  Of course I have no idea when I will be back or even where I will get to, but that’s part of the adventure.  It will be a surprise to us all.

I am not sure why, but for me oh-sparrow-fart always seems to be the best time to catch the tide and do the crossing to Weymouth, and 31st May saw Pippin and I blearily exiting St. Peter Port 2 hours before dawn.  I frequently fail to achieve a smooth mainsail erection, but that morning it shot up into the darkness off St. Peter Port at 0306 a.m., like a hot knife through Guernsey butter – which irritatingly reminded me that my butter was still in the fridge at home.  Humour was restored by the time I prised the last of the sleep out of my left eye off Platte Fougere Lighthouse at the north end of the Little Russel, cuppa to hand; I was positively merry by the time the orange sun peeped over the horizon off the Casquets, heralding the birth of a new dawn full of promise.  This signalled the preparation of breakfast number one, toast and marmalade – without butter – and espresso.

The Casquets in a Good Mood

Pippin closed the Casquets in a light wind and juvenile beam sea, the sound of which was quite audible as it hissed and sucked on the reef a mile off, flinging light spray over rocks as Pippin tussled briefly in swirling overfalls at 7 knots, borne on the rushing tide.  This is no place to be in a gale for sure.

Back in the time when there were Willis’ in Alderney, the alcoholic poet Swinburne, who liked a little flagellation with his hair restorer, wrote of this rocky reef.  He told the story of the daughter – one of several – of the lighthouse keeper, Msr. Houguez, who found love with a carpenter ashore in Alderney.  However, the mad whirl of life in the smoke was too much for her tender soul and she ditched her beau to return to her rocky home.  Reading between poetic lines, I am left with a sneaking feeling that the carpenter may have had a lucky escape.

Back in the present,  the long orange-grey pollution cloud and distant hum of myriad vast engines signalled the approach of the shipping lanes mid Channel, the speeding leviathans all captured on my radar liked squashed bugs on a windscreen.  At this point I turned Pippin 90˚to the shipping lanes as the tide slid her diagonally towards Weymouth, and the speeding ships thundered past well clear of little Pippin.  It would turn soon, by which time I hoped to be far enough east not to have to fight back to clear east of the Shambles.

Meanwhile Pippin laid her own smoke trail for my Cobo Sizzlers, breakfast number 2, were frying a tad quickly in the pan atop the stove – which is why I have a fire blanket next to the galley as it is a regular occurrence aboard my ship.  Lunch was a modest affair.

Calm seas, a soldier’s wind and blue sky are rarely found in my voyaging rucksack but they were all there for me that day as Pippin surged on towards Weymouth.  A fruit energy drink from an old Army ration pack countered sleep deprivation and revved me up, which had me tweaking this and that in search of an extra ¼ of a knot of boat speed.  Pippin seemed to know I was trying and dipped her shoulder a little lower, powering with all sail set towards the evil Shambles Reef, which we passed a mile off, 13 hours out from St. Peter Port.

Pippin Doing What She Does Best

Weymouth is much as I last left it and Pippin is rafted up amongst a friendly crowd, serenaded by a weekend shore side festival.  It could almost be Brittany or Galicia, except for the absence of lovely old gaffers and baggy wrinkle.  Also, unlike Brittany and particularly Galicia, the entertainers know when to finish and bedtime is relatively peaceful, as the day trippers here are generally an older and less energetic crowd.  Certainly, I am unlikely to be plied with gargantuan Galician style G&T on the quayside in Weymouth at 0200, as I was in Coruna last year.

As an aside, I have been ticked off by the editor of a certain boaty magazine for the rubbish quality of my photography.  This criticism  hurt at first, but my daughter Sarah diplomatically pointed out that he was quite right and told me what to do to put things right.  Thanks to the financial generosity of my family, I now have something called a bridge camera, a bulky thing that hangs round my neck and swings and bumps on my tummy as I waddle along, though I like to think the sight might hint at photographic competence.  Anyway, I am not sure exactly what a bridge thingy is, but it seems to do the trick with minimal input from me.  So now if reading this bores you, look at the pictures instead – and if still bored, log out.

Last evening, I was excited and delighted to learn from my sister who popped down to visit, that I was now great uncle to 8.5 lbs of bouncing William as of the night before.  I am particularly chuffed as I never thought I would be a great anything.  He is doing well with his mum and dad in Austria, so pictures will have to suffice until we meet.

Still high on this family news I allowed myself to be seduced by an enormous freshly baked Belgian bun at the top end of St. Mary Street this morning, though getting it home safely through the weaving hordes of mobility scooters was tricky.  I am never quite sure whether the drivers of these devices are actually immobile, or just like to ride, as some look suspiciously lean and fit – well, less immobile anyway.  Personally, I like to use my legs – after all it burns calories, necessary after a Weymouth Belgian bun.

Pippin Snuggles up to a Busty Nauticat

They are a nice yachtie crowd here, though Pippin looks on the small side compared to her bosomy neighbours.  The nice crew next door cheerfully changed planned destinations 3 times in as many hours, from St. Peter Port, to Dielette and back to Lyme Regis before they left.  That’s sailing – its always best not to talk too firmly of destinations.  Me?  With luck I will be sailing Pippin in the direction of Plymouth when that weather window appears.

Weymouth was not noted for many interesting things that I knew of, but as far as I am concerned, it is now.  Taking a break from home cooking, I decided it was time for some Indian scran ashore and as I stepped up onto the poop deck, I saw a carrier bag in the sea astern transform itself, like something out of Alice in Wonderland, into quite the  most magnificent jelly fish I’ve ever seen – and I write as someone who has  swum with Portugese-men-of-war off Malayan beaches!  So there. 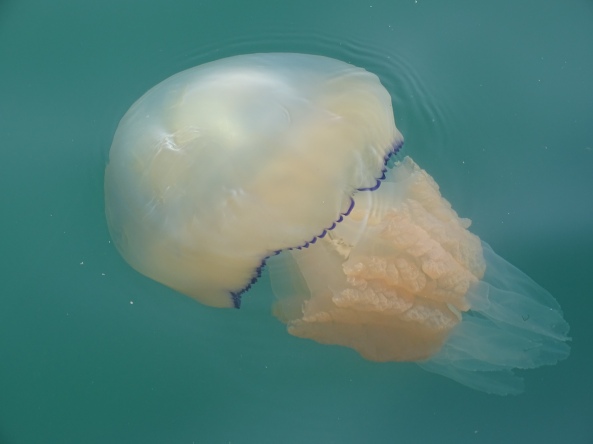 This beauty was not far off the size of a bucket and moved  most gracefully, as if it had not a care in the World which it probably hadn’t.  He, or she, as I haven’t worked out how to sex a jelly fish yet, may of course been attracted by my regular dumping of espresso coffee grounds – though it didn’t seem to move with quite the fluency of a caffeine infused jelly fish.

My neighbours are back after a battering, having failed to make Lyme Regis, a perfect opportunity to offer them a glass of champers from the celebratory bottle delivered by my sister …. sailing is a tough lark